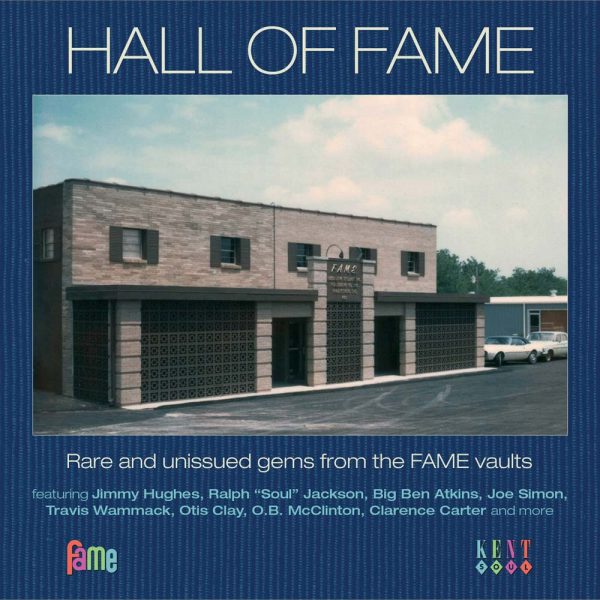 Nearly two years after we began our initial excavation of the Rick Hall’s FAME Studios tape vault, our findings continue to enthral. So far we’ve brought you CDs of the complete FAME recordings of Spencer Wiggins, Candi Staton and Jimmy Hughes, the first of several volumes by George Jackson and a fantastic boxed set, as well as numerous vinyl treats. Now we’re reaching into the deepest corners of the FAME vaults for our first multi-artist scoop of rare and precious soul, part of an ongoing series we call “Hall Of Fame”.

The series will focus primarily on unreleased gems from the studio’s vaults, but will also make room for unreissued sides along the way. Most recordings are finished masters, although we will also be including some demos to give the listener a glimpse behind the scenes at Avalon Avenue. Many will be early recordings of acknowledged classics, as is the case here with Clarence Carter’s demos of ‘Tell Daddy’ and ‘Too Weak To Fight’.

The quality is never less than first-rate and is really quite staggering at times. Even allowing for the vast quantity of great Southern soul that was around at the time, it beggars belief that Rick Hall was unable to find takers for so many great performances – many of them proving to be more than a match for any of FAME’s readily acknowledged classics.

Many of FAME’s major players get a look-in on our series debut. Numerous of the songs will be familiar to collectors in recordings by others who plied their trade at the studio, but the versions here are mostly previously unheard by anyone other than those who participated in the sessions.

The CD abounds with highlights. I’d like to give an especially big hand for Ralph “Soul” Jackson’s fantastic take on Jimmy Hughes’ ‘You Really Know How To Hurt A Guy’ and for Jimmy’s own riveting version of Etta James’ ‘I Worship The Ground You Walk On’. I’d also like to commend June Conquest’s Motown-style rendition of Dan Penn and Spooner Oldham’s ‘I Do’ and Prince Phillip Mitchell’s chunky remake of James Barnett’s ‘Keep On Talking’ – one of only three tracks on here to have been previously issued in any format. But really I can recommend literally everything on a CD for which the phrase “all killer, no filler” could have been coined. By Tony Rounce – Ace Records