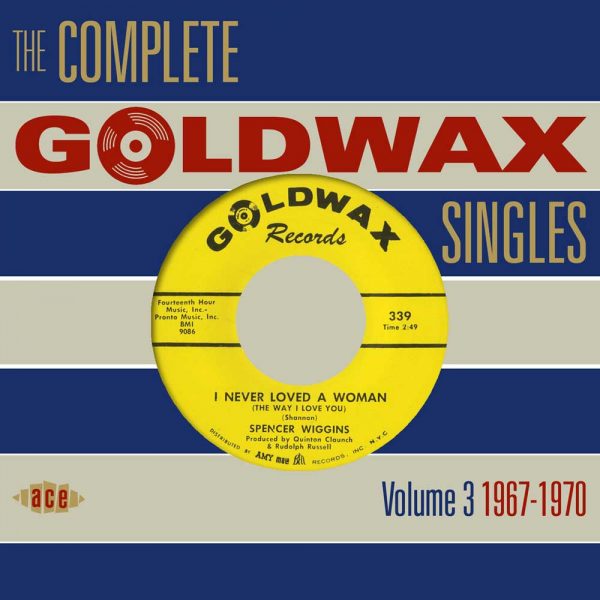 The third volume of the Goldwax singles is the story of music industry decline. If not exactly riches to rags – Goldwax sales were never that good – it is the tale of an independent label slowly losing its way in an increasingly difficult environment. This was not just about a failure to sign talent, but about changes within the business, and that meant that it became more difficult for regional independents to survive and thrive.

The company’s peak year was probably 1967. Musically James Carr and Spencer Wiggins were at the top of their game, whilst the Ovations continued to record great records. New talent such as Willie Walker entered the fray and label owners Quinton Claunch and Doc Russell were confident enough to start the country music imprint Timmy to showcase talent as good as Carmol Taylor and Jeanne Newman. However distributor Bell had no real clout in the country market and the new label’s outpit fell on deaf ears, or more likely wasn’t even played to them. Other signs of how tough it was was the licensing out of various singles by ‘Ivory’ Joe Hunter and Willie Walker to Veep and Chess respectively – which Quinton now admits was to tide the label over cash flow shortages.

In 1968 things were not improving. Although James Carr continued to make records of amazing quality, sales began to decline and, even more worryingly, James became increasingly difficult to entice into the studio and onto the road to promote his records. Inexplicably strong 45s by Wiggins failed to make the charts and it began to look as if the struggle was never going to get easier. Of course all this wasn’t helped by the way that the industry was developing, with a more centralised, major-orientated distribution network taking hold, and the church-based southern soul sounds that had formed the core of Goldwax’s sales beginning to seem old-fashioned, even in the local market. Memphis’ big soul sellers into the 1970s would be the orchestrated masterpieces of Isaac Hayes and the smoother sound of Hi’s Al Green.

The label was effectively over by 1969 and completely over by 1970. The artists had moved on, been sold on or simply left without a label. The final side on Goldwax was James Carr’s ‘Everybody Needs Somebody’ a country soul ballad of exceptional quality, and is typical of how high the quality remains throughout volume three of “The Complete Goldwax singles.” There are errors and side-steps, but until the day the doors swung shut for the final time the sounds of the label were almost always a joy to the ears. This is southern music at its’ very best.