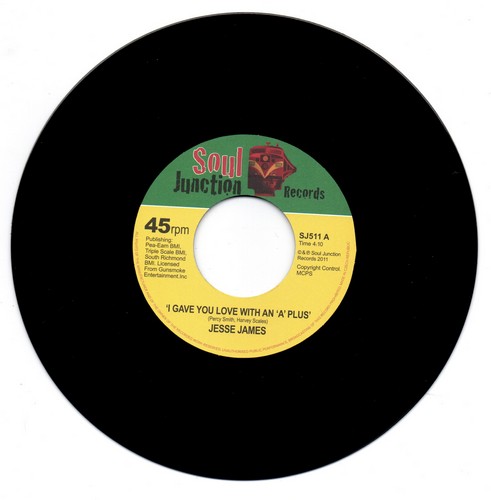 JESSE JAMES I Gave You Love With An ‘A’ Plus

JESSE JAMES Are You Gonna Leave Me

Soul Junction Records have once again dug deep into the Gunsmoke Records inventory to unearth a further un- released 70’s gem from the one and only Mr Jesse James.

So at last we present you with the sophisticated Percy Smith and Harvey Scales penned “I Gave You Love With An A Plus” a great old school stepper with a wicked organ break to boot!

The flip side features Jesse’s perennial, 60’s soul anthem “Are Your Gonna Leave Me” which he recorded for the US Shirley label in 1964.

Jesse James, real name James McClelland was born October 3rd I943 in El Dorado, Arkansas. The pseudonym of Jesse James arose when early on in his career a club promoter struggled to pronounce his surname correctly and decided to introduce him to the audience as Jesse James and from there on in the name just stuck.

Jesse’s recording career has now entered its 50th year during which time he has recorded many classic songs the likes of “Are You Gonna Leave Me” (Shirley119). His 1966 release for Hit records, “Believe In Me Baby “(6120) which later gained a release on the major 20th Century label.

It was during this second spell with 20th Century, that Jesse composed “I Feel Your Love Changing” for a future release, but due to the label putting all their resources into the promotion of Barry White’s material no further interest was shown. Although the song was later recorded by Ester Philips and Sharon Ridley under the abbreviated tile of “Changin’”. Jesse’s original version remained unreleased and in the can until now.

So 35 years on from its inception Soul Junction records have at last given Jesse James’s “I Can Feel Your Love Changing” the exposure it duly deserves. The Flipside of the 45 features an alternative version of “It Time For A Change” a social comment track featured on Jesse’s 2009 cd album, “Get In Touch With Me”.

The cd version of “It’s Time For A Change” is interspersed with vocal extracts from the recent American presidential campaign which features the crowd chanting President Obama’s name. These are omitted from the 45 version but without detracting from the songs poignant message.