Your Account
View basket “Skull Snaps – My Hang Up Is You / I’m Your Pimp 45 (Outta Sight) 7″ Vinyl” has been added to your basket. 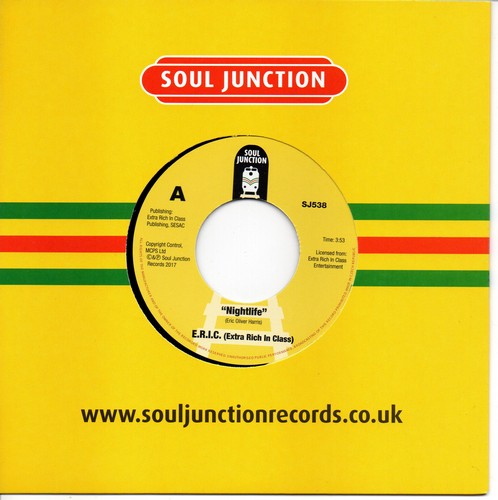 E.R.I.C (Extra Rich In Class) is the performing alter-ego of Mr Eric Oliver Harris a former New York banker, who turned his back on Wall Street and the world of commerce during 2008 to follow his dream of being a full time musician and boy! He hasn’t looked back since. It was E.R.I.C’s 2008 self penned, ”Drama” project which initially brought him to the attention of UK Indie Soul fans followed by his 2011 “Groove” project from which several of his tracks were licensed by the then UK based Soul Unsigned Label for a compilation album. E.R.I.C’s involvement with Soul Junction came about through the licensing of his 2012 outing “Backstage” a track that really tore the airwaves of internet radio up and as such was a must for inclusion on the Soul Junction “Extra Rich In Soul” (SJCD5007) compilation, the album title being a play on “Extra Rich In Class” to E.R.I.C’s delight.

Back then, many people asked us to release “Backstage in a 45 format but for whatever reasons this never materialised. Moving forward E.R.I.C continued to perform unabated with his one man show performing primarily as a Luther Vandross Tribute act but always included his own material as part of the overall stage show.
nDuring the summer of 2016 E.R.I.C returned to the UK airwave’s with yet another vanity project “The Night Life” EP, a five track set that featured the excellent songs “life’s A Mess” and “Playboy To Playboy”. But it was the title track “Nightlife” that ignited the radio jocks interest and for that matter Soul Junction’s too. So a cunning plan was hatched to release for the first time on a vinyl format two of E.R.I.C’s most popular songs. So before you, you now have the soulfully haunting ballad “Backstage” backed with the joyously uplifting feel good dance track “Nightlife” which I defy even the most stoic amongst you not to start tapping your toes along too.- Soul Junction